Heroes of the Secret Underground – race for survival

Autobiography, biography, history, philosophy, fantasy, ‘Heroes of the Secret Underground’ is a thrilling race for survival.

A secret symbol hidden in a stolen locket.
A desperate race through the bombed streets of Budapest.
Truths that must be unveiled.

It’s the year 2000. The international year of peace. Louie is nearly thirteen. She lives with her brothers Bert named after Albert Einstein and four year old superhero Teddy, in the Majestic Boutique Hotel run by their Hungarian grandparents. All seems peaceful, but there are dark undercurrents and baffling mysteries. The sudden appearance of the rose gold locket and a girl from the past opens the portal to a trail of clues, secrets and lies, spinning Louie and her brothers into a world at war. Budapest 1944 where they meet their grandparents as children.

In a breathtaking race for survival, they must discover the meaning of the locket, the secrets and heroism of the past. They must become heroes themselves, to right wrongs and bring change to the present and future.

The story ends where it began at The Majestic Boutique Hotel, with Louie and her brothers rebalancing their world and the world of others.

‘This is a personal story that has huge meaning to all of us, beginning in a beautiful safe world which turns suddenly to chaos and terror. A child discovers for herself that there is history that can’t be hidden – it cries out in the darkness of secrets. But it’s also a story of light and love and exceptional courage. The pages seemed to turn by themselves. Please read it.’

‘This book will enchant you with its mystery, excitement, adventure, and the extraordinary courage of its characters. It will be impossible to stop reading, and when you finish the book you’ll find the insights and compassion stay with you always, as do those you have met within its pages. As Susanne weaves in stories from her family’s secrets, she writes about the essence of humanity.’

‘A truly extraordinary read that captures your heart and soul. It’s sensational … the magic realism … the time jumps  … the tension and drama just radiate. The stakes are life and death and I was riveted. Beautiful vivid characters who I cared about so much. It’s an absolute hands down winner.’

Thank you to May Gibbs Children’s Literature Trust for the Fellowship that gave me creative time to work on ‘Heroes of The Secret Underground’.

Heroes of the Secret Underground Begins 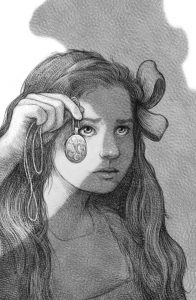 As the Lieutenant is about to leave, he looks over at the girl Verushka, with her soft hair tied into a waterfall of white satin ribbons. He moves closer to her. Zoltan leans over Verushka’s chair. The Lieutenant laughs. ‘Hey, boy, so you’re protecting her?’

The Lieutenant bends down close to Verushka. As he reaches for her, Verushka jerks backwards. Zoltan jumps in front of her. The Lieutenant shoves Zoltan to the floor.

‘Give that to me, girl.’ He points at her necklace.

Verushka cradles the locket in her hands. ‘I can’t. Please, it belongs to my family.’ Her voice peters out as she watches his mocking smile.

‘Your family. Is that right? Who do you think you are? Judensau.’ He glances at the other soldiers, who snort and splutter. ‘Judensau. Family of pigs. Daughter of pigs. Generations of pigs.’ He raises his black, leather gloved hand. ‘When I say give it to me, you give it.’

His slap cracks the air, leaving a glaring handprint across Verushka’s face. Zoltan scrambles to her side. Verushka’s parents reach out to her. The soldiers raise their guns.

Verushka’s eyes become greener than the most precious emeralds. She calls out, ‘The locket’s yours. Here. Here.’ She unclips the robin clasps. Forcing her hands to be

still, she holds out the rose-gold necklace. The locket swings like a noose as she drops the necklace into the Lieutenant’s hand. He shoves the locket deep into the blackness of his army pocket.

The Lieutenant looks around. He points at a soldier to stand guard at their front door. Then he signals for the rest of the soldiers to leave. The door slams shut and they’re gone.

Verushka clasps her chest. Her voice is defiant. ‘You can’t rip out my heart. You can take the

locket, but not my heart. That is mine.’

Zoltan locks the front door. The professor and Mamma hold Verushka. Her tears feel like blood.

Louie loves summer holidays. She whistles at the scarletbreasted robins splashing in the fountain. They whistle back. Honey woofs, faithfully padding beside her as they pass grand mansions, tiny terraces and antique shops. She stops to look at the ancient clocks, antiques and

jewellery in Dame Coco’s shop window. There’s always something amazing there. Dame Coco waves, and her crystal tiara bobs between her grey curls. Her face crinkles into a smile. Dame Coco has a secret broken heart, which makes Louie love her so much more. Orange birds of paradise plants, with their exotic blue petals, peer through the wrought-iron fences. Louie

‘Good afternoon, Lou-iii-sa.’ Mrs Tulip peers from between the displays of peace lilies on the counter.

Louie flinches. No one calls her Louisa. Not like that, anyway.

‘I’ve told you before: tie up your hair or cut it off. That hair is hanging all over your face. Are you a monkey?’

Monkey rings through the shop, like spit. ‘I love monkeys.’ Louie defiantly pushes away her soft brown curls, willing them to bounce back. ‘Can I have the flowers now?’

When Fact and Fiction Become Story

Heroes of the Secret Underworld is deeply linked to real events and the experiences of millions of people as well as the author’s own family. Susanne and her kids ran the creaky and mysterious, The Majestic Boutique Hotel in historic Sydney. Her family escaped Nazism and communism to find their way to freedom. The child of Hungarian refugees, Susanne’s grandmother, aunts, nieces, nephews, the baby twins, did not survive the Holocaust.

Her father was part of the youth underground, who saved the children of Budapest. Its headquarters was in The Glass House in Budapest 1944. The Glass House became the last refugee to escape the deportation to death camps and at one time housed up to 3000 kids, women & men. There was one toilet and one shower.

The story of The Glass House is incredible with so many heroes at a time of evil. Discover the heroes in the story and the glossary of ‘Heroes of the Secret Underground’. The Glass House  still exists 10 minutes’ walk from the magnificent Hungarian State Opera House. The address is 29 Vadász Street, Budapest Hungary. Its history is largely unknown.

The Hungarian State Opera House was part of Susanne’s mother’s life. Music was part of their lives. She loved her beloved violin.

The Danube, Margaret Island in the Danube, the bridges across the Danube, Gellert Hill, are at the heart of Budapest and ‘Heroes of the Secret Underground’.

Shoes symbolise so much within literature, life, philosophy, human experience and ‘Heroes of the Secret Underground.’

‘You can’t really get to know a person until you get in their shoes and walk around in them.’
― Harper Lee, To Kill a Mockingbird

Susanne grew up with the secrets of the past, like many second generation children of survivors.   Heroes of the Secret Underground was written to resolve hidden ghosts,  recognise the courage of kids and bring knowledge from the past to create change for the future.